When does diversification become diworsification?

Recently, several of our members have again raised the issue of investing in the U.S. economy  by buying an exchange-traded fund (ETF) which mirrors the S&P 500 versus buying an ETF such as the MSCI EAFE which mirrors the economy of other developed markets.

One way in which we can predict the market direction is to look at its past direction, unreliable as that method is. (We would be hard-pressed to find a better way. None work all the time.) That approach has been used as an analogy to driving a car by looking at the rear-view mirror. Using that method, we can see that the S&P 500 has outperformed European markets, emerging markets and the Japanese market over the last decade. As we have previously shown, globally, over more than 100 years, stocks have been the best place to invest savings. 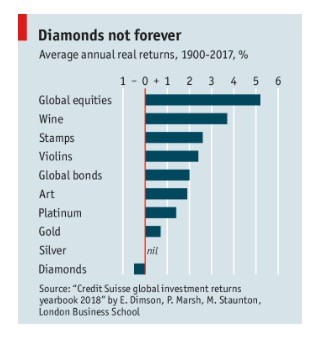 In our blogs that we have repeatedly stated that, based on the last decade, a U.S. index Exchange-Traded Fund (ETF) which tracks the S&P 500, held in a tax-advantaged account, has been the investor’s best way for growing savings and is likely to remain so for many years. That is based on the last decade. Going further back, Canadian and American markets have alternated in performance with one growing faster than the other, decade by decade.

The makeup of the Canadian and U.S. equity markets differs significantly. The U.S. market is based on a widely-diversified economy with companies in every sector in existence. Many successful investors see the U.S. market as presenting adequate diversification.

Will a portfolio based on the U.S. economy alone do as well in the coming years? How should investors position their portfolios for the best future results?