Recently, under the title Colossal economic drop; enormous members’ gains we posted a blog describing how some of our members’ earned more than 2% for the week by writing (selling) just-out-of-the-money  covered calls on Novavax (symbol NVAX) expiry date, Friday of the same week (C 31JUL20 140.00). They did so during the worst market conditions imaginable.

After that, the returns on NVAX derivatives were no longer interesting. For a while!

Well, they are interesting again.

A word of caution

Equalling the market over the course of an investment lifetime would allow individuals to maintain their income level in retirement to match their career income. They simply need to practice the six habits Monday morning millionaires to achieve that outcome.

To do even better than that almost always requires investors to neglect one or more of these habits.

Investors who sell just-out-of-the-money covered calls (C 14AUG20 172.50) or just-in-the-money cash-secured puts con NVAX are abandoning two of these. First, they are picking a stock instead of buying the entire market.

Let us look at the stock.

As you can see below, MorningStar analysts claim that NVAX is overvalued by 34%. 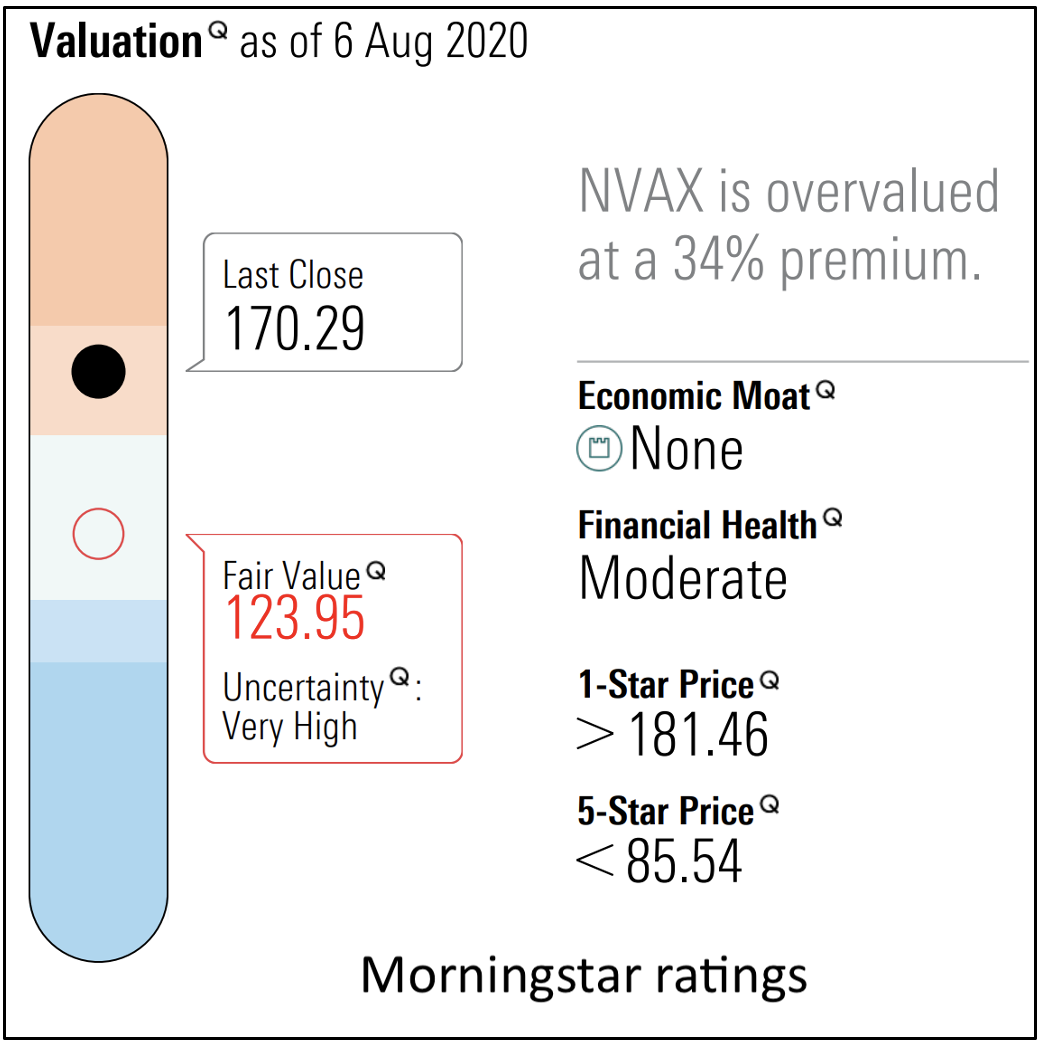 Secondly, investors who have the six habits on Monday Morning Millionaires take profits and get out of investments as they rise. They are not doing that in this case.

What can they expect?

When the market opens at 9:30 AM Eastern standard time, the numbers mentioned above will be slightly different. Nevertheless, they will be exciting.

I recently wrote a post about balancing good returns with safety. I bought a security and wrote covered calls on it, expiry date in three weeks. (There were no closer expiry dates. The closer the expiry date, the better.)

Selling derivatives on NVAX gives such high returns that before the market opens, I will look into buying back the covered calls contract mentioned above (that cancels the covered call position) and selling the underlying, probably at a loss.

Then, I can use the money from selling the underlying to buy NVAX. That will then allow me to sell more covered calls on NVAX which should more than offset the losses.

I will keep you posted.

The Monday Morning Millionaire Program was designed to offer compressed investment convictions. Over the last two decades, the program has outperformed over 90% of portfolios including professionally managed ones.

With fewer than 400 words, members can read this post in less than five minutes. Following and studying the links imbedded in these posts would take longer. How members manage a post depends on their level of interest and investing knowledge.