How to avoid irreversible losses: stay with an ETF tracking the S&P 500. 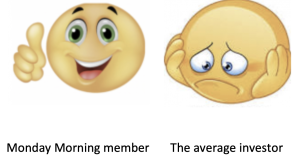 Yesterday, one of our seasoned investor members wrote: “Marcho Partners is a tech-focused fund founded by a onetime tech investor Chamath Palihapitiya. The London-based fund, which had over $1 billion in assets under management at its peak, was down nearly 84% through June 30, according to a summary Marcho sent to its investors, marking one of the worst-known performances for a hedge fund so far in 2022.

Behind the dismal results: a leveraged bet on a relatively small number of highflying growth stocks that have plummeted in value, such as Shopify and British online used-car retailer Cazoo Group.”

A little earlier this year, another one of our seasoned investor members wrote: “BlackRock, $BLK, just lost the largest amount of money lost by a single firm over a six-month period evaporating $1.7 trillion of clients’ money. Blackrock has invested in many passive ETFs. I will be curious to see whether active managers suffered similar losses.”

There are more than three times as many ETFs today as there are individual companies listed on the New York Stock Exchange. Most are passive, that is, other than selecting the securities which they will hold, there is no effort to run them.

Several hundred ETFs are actively managed, which means that management fees are a part of ongoing ownership costs.

We have previously written that the security we use needs to be an ETF that mirrors the S&P 500 which, in turn, mirrors the American economy. That means no stock picking. Picking stocks could result in investing in a company that declines and never recovers. Penn Central Transportation Company,  Enron,  WorldCom,  Lehman Bros. — the list of corporate collapses is long.

The most reliable way to protect against that possible outcome