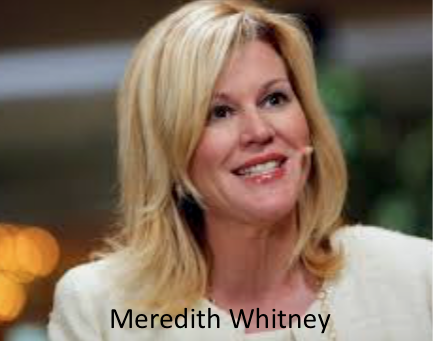 Who but the weatherman can be wrong much of the time and still keep the job? Stock market gurus and forcasters, that is who.

Meredith Whitney made quite a name for herself as a  stock market Oracle when she predicted the banking crisis that in late 2008. Her noteworthy call on Citibank’s balance sheet troubles got her widely talked about, written about, interviewed, filmed — she could do no wrong. A genius.

The genius appeared on the CBS news program 60 Minutes, where she confidently stated that there would be “50 to 100 sizable defaults” in the municipal bond market.

As an aside, Monday Morning Millionaire Program members don’t buy bonds. After taxation and inflation, the loss of purchasing power of bonds, that is, negative returns if held to maturity, is the case nearly always.

September 2012, the Wall Street Journal published a disparaging piece titled “Meredith Whitney Blew a Call—And Then Some.” She had predicted “50 to 100 sizable defaults” — there were five!

Investment history is replete with renowned experts with advanced training and extensive experience, with access to the best tools, the best equipment,  the best data available, with access to VIPs and insiders, making disastrous predictions.

Jesse Livermore became one of the world’s wealthiest people speculating in the stock market. An expert’s expert, he could see ahead, he could predict, like Meredith Whitney, he could do no wrong.

In 1940, due to speculative failures, Livermore committed suicide leaving an 8-page note stating “Can’t carry on any longer. This is the only way out. I am a failure.”

Irving Fisher, seen as “the greatest economist the United States has ever produced” by respected, Nobel Prize-winning colleagues, is largely remembered today for saying just before the Wall Street Crash of 1929,  that the stock market had reached “a permanently high plateau”.

There are other examples. Long-Term Capital Management, with some of Wall Street’s major figures as well as two Nobel Prize-winning economists, needed a bailout of billions by more than 10 financial institutions in order to prevent market panic and collapse of the entire financial system.  Experts at work.

Ray Dalio is well worth following. His half-hour YouTube video How The Economic Machine Works will give viewers the best education on economics available in such a short time. But, check recent headlines about what Dalio has to say.

Feb. 28, 2019, Ray Dalio Is Changing His Mind About the Next Recession

If you go to a search engine and look for Dalio economic predictions you will note a great deal of vacillation.  Eloquently stated but vacillation, nevertheless.

And how does the Monday Morning Millionaire Program (15.5% annual return since 2012) compare? The investment habits that older members have and newer members are developing, will very likely result in a portfolio performance that, over the course of a decade, will do better than over 90% of other portfolios including ones managed by experts. It has been ever thus.