Dinner With Charlie: The World According to Mr. Munger 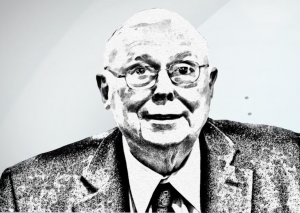 Charlie Munger is a living reminder that to be a great investor, you must be a great learner.

Listening to the vice chairman of Berkshire Hathaway Inc., as my colleague Nicole Friedman and I did on a visit to his Los Angeles home in late April, you would never guess that one of the world’s greatest investors is 95 years old—or that he is nearly blind, or that he can barely walk without severe back pain. Mr. Munger has a superabundance of stamina, curiosity and concentration that many people a third his age would envy.

Nicole and I—along with Mr. Munger’s friend Peter Kaufman, chief executive of Glenair Inc., an aerospace-parts manufacturer in Glendale, Calif.—were there to talk with him about his obsession with designing buildings for schools and other nonprofits.

But Mr. Munger was there to talk about anything on his mind, which is just about everything. His favorite activity, he says, is figuring out “what works and what doesn’t and why.”

In his study, books—Shakespeare, Twain, biographies, histories, and anthologies of humor and short stories and poetry—are everywhere. Mr. Munger says he reads himself to sleep every night, sometimes staying up until 3 a.m. (On a normal day, he’s back at his work by 8 a.m.)

“ ‘Warren and I feel it’s our moral duty to be as rational as we can possibly be.’ ”

We arrive just after 6 p.m. Once Mr. Munger starts talking, he speaks almost nonstop for hours.

At one point around 10:30 p.m., Mr. Munger signals that the evening is over. But then another thought occurs to him and he leans forward again, reopening the floodgate of words he had just closed. He doesn’t stop talking until a few minutes before midnight.

Here, in brief, are some of the topics we touched on. (A fuller transcript is available at this link.)

WSJ: Can any companies resist competition from Amazon.com Inc. ? Who is Amazon-proof?

WSJ: What about Berkshire?

Mr. Munger: Everybody else has a lot to fear from Amazon. I didn’t name Berkshire! I named Costco.

Mr. Munger: We’ll earn a lower return than we did on the way up. Not only is it harder to have all the extra money, but we had idiot competition when we were young. Now we’ve got tough competition scrounging every area and little niche. No, it’s way harder.

Mr. Munger: Well, compared to what? Compared to ordinary securities, of course. If you’ve got anything like what we had when we were young, then you shouldn’t buy Berkshire.

Mr. Munger: I think we’ll beat it a little. But that’s not bad with a market cap of over $600 billion. That’s difficult! Most people won’t do as well as we will.

WSJ: Index funds now own more than 23% of Berkshire’s Class B shares. Do you worry that they are becoming too powerful?

Mr. Munger: It may be good. Now that the index [funds] are starting to push people around a little, it may be a plus. It may make the thing more capitalistic. But it will never be considered a plus by the people who are in the corporations. Hell, they like a system where they can do what they want and you would too, if you were at a venture like Procter & Gamble or whatever. You wouldn’t want anybody changing your world from the outside.

WSJ: Can big tech companies survive the political pressure to break them up?

Mr. Munger: The answer to that is yes. When these tidal forces of change come in, the politicians [are] pissing against the tide. It won’t work. The tide is too strong. Nobody’s going to stop the Internet that enabled me to get that table for $100. And everybody’s threatened by it. And it’s not going away. And it shouldn’t go away. It’s good for the world. What would it be like if we were all digging for potatoes together?

WSJ: Who could succeed you, Warren Buffett and Jack Bogle [the late founder of the Vanguard Group and pioneer of index funds] in encouraging higher standards of business conduct?

Mr. Munger: The kind of people that come to the top are the kind of men with reasonably high IQs, but not super-brilliant, who would have been elected head of a fraternity house. At the top, you need a certain kind of a mind that automatically makes sense about investments and money. People have it or they don’t, and if they don’t have it, you can’t create it. It’s almost an inherited knack….You’re asking for a lot. It doesn’t happen very often.

WSJ: You must have more than one knack.

Mr. Munger: Part of the reason I’ve been a little more successful than most people is I’m good at destroying my own best-loved ideas. I knew early in life that that would be a useful knack and I’ve honed it all these years, so I’m pleased when I can destroy an idea that I’ve worked very hard on over a long period of time. And most people aren’t.

WSJ: Most people hate that.

Mr. Munger: Yes. But actually, I know how much power and wealth is in it, so I like it. Plus that’s enlightenment. Power, wealth and enlightenment. Not a bad combination.

WSJ: I wouldn’t ask most people this, but I’m sure you won’t mind. What would you want the first paragraph of your obituary to say?

Mr. Munger: Both Warren and I feel it’s our moral duty to be as rational as we can possibly be. A lot of people who are brilliant in some ways tend to make these utterly asinine decisions in other ways. We both tend to collect the asininities of the world in a kind of checklist. And we try to avoid everything on the checklist.