Could I do better with an actively managed portfolio?

I am a 71-year-old dentist and plan to retire in three years or less. I currently have $2 million with Fisher investments and $3 million with Vanguard investments. I’m not pleased with the Vanguard performance since they did not equal the market, so I took my money out and put it in with Fisher thinking that I need someone to manage the account actively. I would appreciate your opinion.

First, congratulations on saving $5 million. You can live very nicely on that amount in retirement without depleting the principal. (See below.) In fact, you can likely grow it and leave an inheritance for your family and a gift to charity.

Writing in Forbes, Ken Fisher himself stated: “My 2014 stock picks lagged badly. Equal money invested in each, upon publication, less a 1% commission haircut, did four percentage points worse than the same money plunked into the S&P 500 (with no haircut).”

Below, you can see the to-date, six-year performance record of the S&P 500, Fisher Asset Management LLC and the average hedge fund portfolio. Finance academics and scholars fully expect this result. 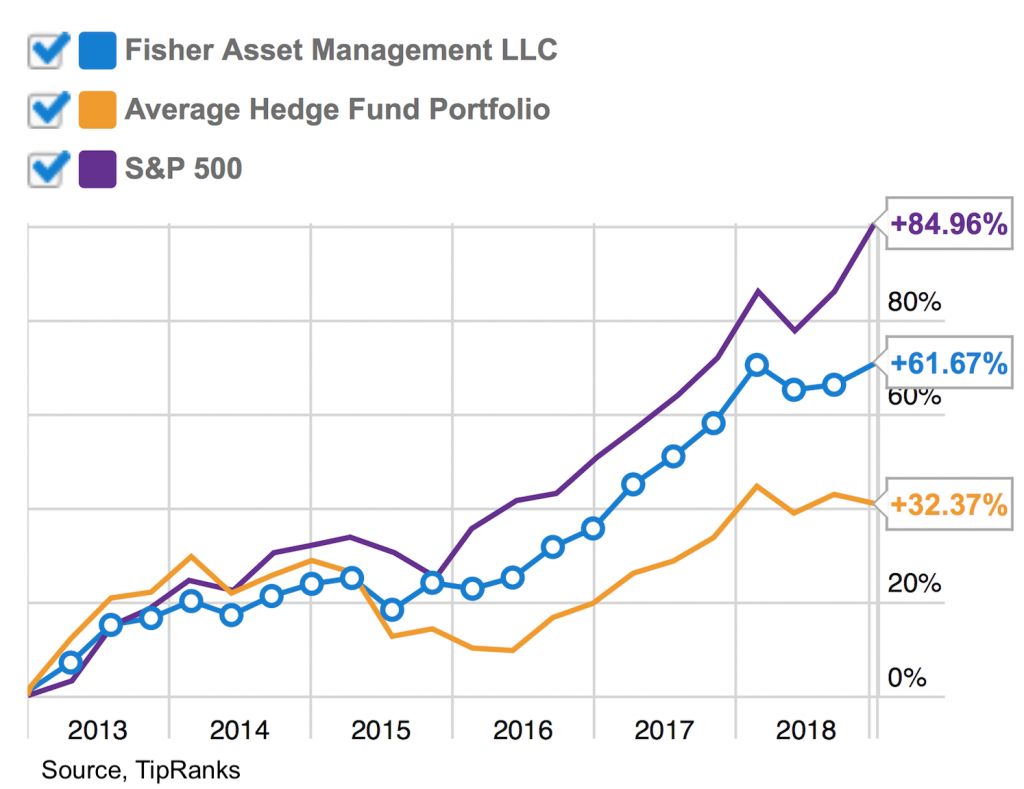 Fisher Asset Management LLC outperformed the average hedge fund. However, as expected by financial scholars and academics, the company could not equal the S&P 500. The number of active managers who beat the S&P 500 over the long term is much closer to 0% than it is to 10%.

As we stated in our answer to journalist D. B.’s question “Can buying a hot stock make an investor money?”, in April 2000, Barber and Odean published a paper tracking over 66,000 accounts (that is not a misprint) over a five-year period. Active investors earned an annual return of 11.4 percent. Passive investors gained over 17 percent during the same period. Many other studies show similar outcomes.

Equalling the S&P 500 is as easy and straightforward as it is nearly impossible to beat over the long term. The reason that so few professionals equal the S&P 500 is the need to subtract management costs from the performance. Over an investing lifetime, that cost easily adds up to a year’s income for investors. The Monday Morning Millionaire Program shows how to be a self-directed investor and keep that money.

For most retired people, the best choice for long-term investing is to do nothing else but to hold an exchange-traded fund (ETF) which tracks the S&P 500 and do so within the bounds of a personal asset allocation regime. This increasingly popular approach is called passive investing. Examples of ETFs which follow the S&P 500 are the S&P 500 ETF (symbol SPY), Vanguard S&P 500 (VOO), and the iShares S&P 500 (IVV). Each is an excellent approximation of the U.S. economy, the most robust economy in history.
Some of your money is likely held in tax-advantaged portfolios while some of it probably is not. Moving money from one account to another could result in a tax hit. Consult with your accountant about this.

Regarding your Vanguard experience, the company has over 200 funds of various sorts. What we stated above, applies to them as well.

Vanguard founder John Bogle, greatly admired in the investment community, originated the idea of doing nothing else but holding an exchange-traded fund (ETF) which tracks the S&P 500 and doing so within the bounds of a personal asset allocation regime. In his will, Warren Buffett himself wants to have his estate managed precisely that way. That should be good enough for any of us.

Let us take a look at the details of your situation. You could comfortably retire right now.