On March 9, from Chuck Davidson

I am a Canadian dentist and have been a DIY investor since I began investing many years ago. Early on, I invested a portion of our savings in the American market, however, I invested heavily 25 to 30 years ago in the Canadian market. I have never regretted that decision despite the fact that the Canadian market represented only 3% of the world’s capital. I certainly do not argue with having considerable investment presently in the American market, however I have been investing long enough to have seen both markets rise and fall. The question I have is why the recommended ETF’s are traded on the American exchange (New York stock exchange) rather than their counterparts on the Canadian exchange (TSX) given that the disposable income to purchase these ETF’s is made in Canadian dollars and also given the difference in the dollar. I am aware that the difference in the dollar is probably paid on either exchange somewhere during the purchase of the funds. Thanks.

While it has been possible to pick Canadian stocks which have outperformed US market index exchange-traded funds (ETF’s), and we hope that you have done that, a review of evidence-based, peer-reviewed papers shows that doing so consistently is nearly impossible. That is why we think that buying the market as a whole by buying market index exchange-traded fund ETF’s is a better choice for most investors.

And why the US market? Over the last decade, the S&P 500 index, a good approximation of the USA economy, averaged 9.9%. And the Toronto stock exchange composite index? It averaged 1.1%. When we factor in the 1.6% inflation during that period, generally investing in Canada resulted in the loss of purchasing power. (See our December 18, 2017 blog titled Invest in USA or Canada?)

Will the US market continue to outperform the Canadian market?  It has been said that investing is like driving while looking in the rearview mirror. Individual investors need to make that decision for themselves.

Concerning the US dollar Canadian dollar difference, look at the chart below. 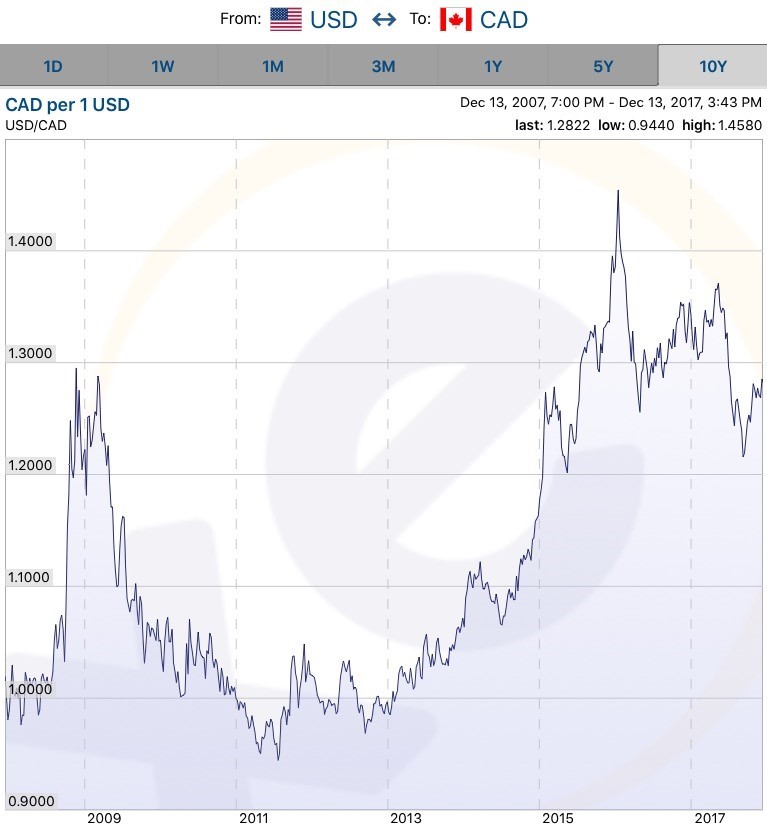 Except for three short periods (2008 and twice in 2011) the US dollar has been stronger than the Canadian dollar over the past decade in the chart above. The same is true going much further back.

Will the US dollar continue to outperform the Canadian dollar? Again, it is like driving while looking in the rearview mirror. Individual investors need to make that decision for themselves.