A recent corporate indictment. Effect on market price and on Monday Morning Members

A turkey that is fed every day will believe that it is the general rule of life to be fed every day. But then, the day before Thanksgiving, the unexpected happens as the chart below shows. 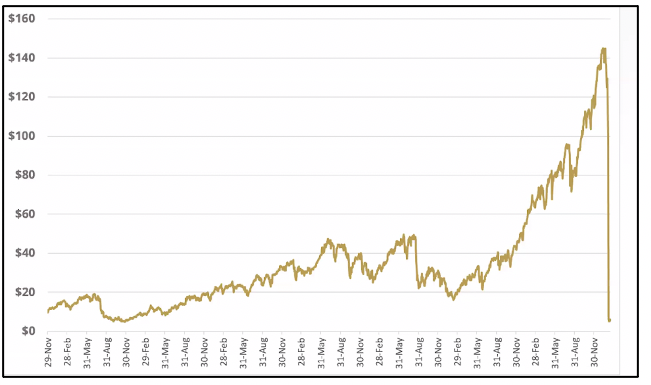 Nassim Taleb came up with the concept of The Turkey Problem.

The charts of securities that fall out of bed look very much like the chart of Taleb’s Turkey. The examples we used were Nortel, WorldCom and Enron. Nikola Corp. (NKLA) has now joined that list.

Based on hype rather than reality, by April of 2000, the share price shot up; the company, which had nearly no product had a market value greater than the Ford Motor Company!

Knowing what was developing in the company, insiders, friends and family started cashing in their chips, the stock price declined. It hit a new low two days ago (July 29) when the company founder, Trevor Milton, was indicted for criminal fraud which included “lying about nearly all aspects of the business” and two counts of securities fraud.

Actress Eliza Dushku is credited with the aphorism “Go big or go home.” Milton does not need to go home. He has been freed on a $US100 million bond. ($US100 is not a misprint!)

As usual, those who sold high did so at the expense of those who bought from them.  Except in their “fun” portfolios, Monday Morning Program members do not buy individual securities.  They do not buy high but only sell, based on their asset allocation.

Taleb’s turkey stock prices have no effect on them.

As we often state, with the habits of the Monday Morning program, luck hardly matters.